It is written that even in the womb there is the spirit of a warrior present in every African. During birth once the infant takes his first breath that spirit is unleashed from his loins, swiftly spreading throughout his entire mind, body, and soul.  And as the child grows and if adequately nurtured, this warrior spirit becomes stronger with each passing year. Every child in every country on the continent knows at some point he shall be called upon to test this spirit within him. For most it is a subtle experience and occurs without much attention brought to it. But for others, the manifestation of that warrior spirit will be the most impressive event in their lives.  It becomes an occasion that is destined to be remembered for all times.

One of the greatest displays of this was illustrated by the now legendary tribal leader Kafumba of Chefaridugu. His moment to prove his courage was at the youthful age of 25 years. It has been almost 5 years ago that his village was taunted by the appearance of a ruthless & deadly lion in the dry season of that year. And during that time, this lion continuously slaughtered many villagers and injured even more. The  tribal leaders had failed to develop a plan that would successfully capture and destroy this persistent threat to their community.  That season this lion had become the largest menace to this otherwise quiet and peaceful village.

Many tribal warriors fought with the beast, and some were even close to victory. Several times the lion had even been severely injured, only to return weeks later and re-attack. None of the warriors had been successful at killing the brute in order to put an end to this murdering spree. It was only when Kafumba presented himself before the King to request that he may be allowed to hunt down, fight and kill this creature that some hope was in sight. He had been away most of the dry season visiting relatives in another village. But when he returned home and heard about the death and injuries in his village, he reasoned that he must do something. He thought that this would be a great opportunity to prove himself a worthy warrior. He would slaughter the lion to not only bring peace back to his village, but to bring honor to his family and tribe. After the King had approved his request, the tribal leaders gave him all the information they had regarding the previous attacks on the village. One of the most valuable facts he had learned from the tribal leaders is that all the previous warriors had not pre- planned their attack against the lion; they had neglected one of the key teachings of their warrior training: planning. They had mistakenly waited until the creature appeared in the village and attacked them before challenging him. Kafumba would not wait for the lion, but instead he would seek out this beast and challenge him long before he reached the village.

The following morning Kafumba mentally planned out his attack.  He had been advised that the lion usually attacks in the early morning hours at the peak of day light.  And he knew the attacks usually occurred between 3 – 5 days apart. The last attack had been just one day prior to their meeting; thus, the next attack would be within the next few days. That afternoon he walked the perimeter of the village, attempting to locate evidence of where the lion had roamed. And after having found suitable evidence in the form of footprints, broken tree branches and dried blood, he was convinced of the path he should take. Late that night Kafumba gathered two blankets, food, water, and his sword and began his journey to hunt his prey. After having traveled several miles into the valley, he found a place to rest for the night. He spread one blanket on the ground and the other he used to cover his body.  As he slowly drifted off to sleep, he thought about this most important task at hand. Once again, he reminded himself that his family and the entire village was depending on his victory; he vowed not to disappoint them.

It was daybreak when the warrior was suddenly awakened by the sound of a loud roar in the distance. Instinct caused him to immediately jump to his feet, despite the fact that he was not yet fully awake. He looked around but had no visual on his prey, but a sudden breeze in his direction caused him to pick up the scent of the beast. He quickly grabbed his sword allowing his nose to lead the way; he followed the scent. Around the same time the scent was becoming stronger, he again heard that loud roar. And within seconds, the creature appeared about 200 feet in the distance.  Kafumba, without hesitation or forethought, raised his sword and began charging directly towards the lion. At that moment, time seem to be in slow motion. As he reached closer to this unknown fate, in a brief moment, the warrior felt a strong sense of fear. The feelings of fear gripped through his psyche with a force so powerful that he had not realized he had made physical contact with the lion and that the creature had scraped his chest with a huge paw. He quickly cast that fear aside; he knew that this fear was a natural instinct, but this gift of the warrior spirit was of the supernatural.  So as the warrior looked down at the marks and the blood streaming from his ripped skin, he regained his composure and immediately raised his sword slashing his attacker’s throat. The lion let out a loud, gurgling moan and simultaneously  loosened his grip on the warrior ever so slightly. And Kafumba took that opportunity to strike again, this time ramming the sword directly into the heart of the lion; death was instant. As was customary in his tribe after a kill, Kafumba severed the lion’s head to take back to his village as proof of his triumph.

Kafumba is the most celebrated warrior in Chefaridugu. The day he killed the man-eating beast, he became an instant legend. And because of his courageous act of bravery, he was honored as a tribal leader. One of his primary duties now is to prepare future warriors to fight any internal and external enemies who would threaten their respective villages. Kafumba frequently shares the experiences he learned that day with his students, the future warriors. He was ready physically, spiritually, and psychologically because of the training and nurturing he received as a child. Also, he was able to successfully overcome the fear which rose in him right before the fight. And one of the most valuable aspects of his victory was his preparation; his planning was clever.  He was able to master the concept that the warrior spirit within him was far greater than any other obstacle, including the obstacle of fear.  Overcoming that fear, being prepared strategically for his task, and utilizing his warrior training all were key components that awarded him victory that day. And all of these attributes are the indicators of a successful fighter.

Long live warrior Kafumba. May his focus, bravery and warrior spirit continue to be an example for generations to come. 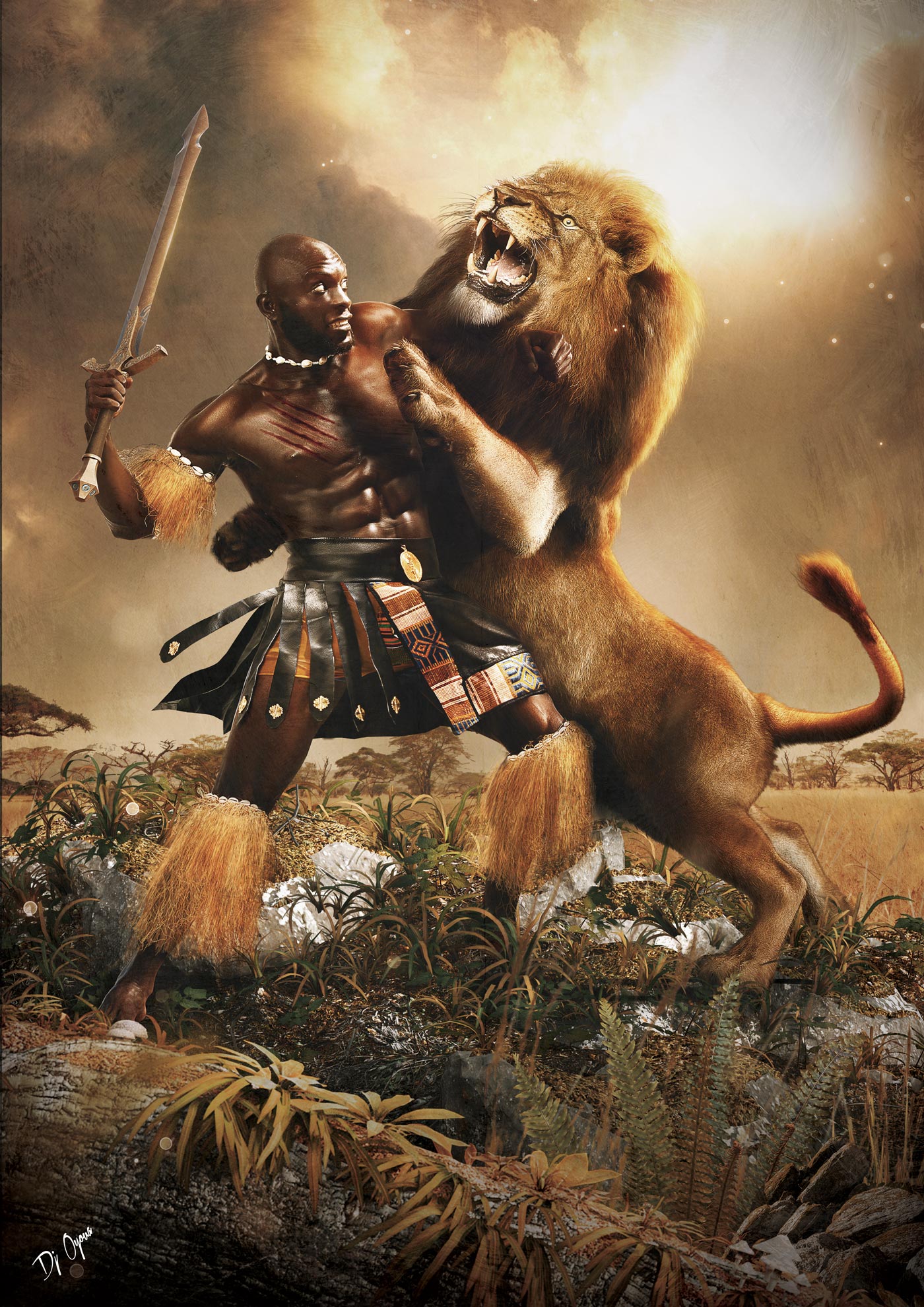 Eva Learning is a narrative storyteller of artwork. She lives in the Southern region of the United States. She has always had an enormous passion for writing. Over the years she has combined her art of writing with her love for helping people. She has assisted people with everything from creating business cards, writing resumes, cover letters and speeches to assisting colleagues, friends, and family members with the writing of obituaries and mini biographies. This most recent undertaking of writing narratives of artist’s drawings and paintings has proved to be quite rewarding personally for the author. Eva believes there is a story to be told in every writing venture. Whether one is addressing her accomplishments in order to seek employment, telling the life story of a loved one upon their passing, or expressing a vibrant story of art on a canvas, they all include messages to readers. And Eva’s primary focus is making those messages concise and vivid. Upon reading Eva’s writings, the readers come away with not only a heightened sense of the work itself, but a keen impression of the individual presenting that work as well. When she is not busy drafting up phenomenal storylines, she enjoys genealogy research, reading about ancient African Culture and Customs, experimenting with ways to cook and eat healthier, and walking daily to maintain her fitness goals.

Eva’s contact information: This email address is being protected from spambots. You need JavaScript enabled to view it.. 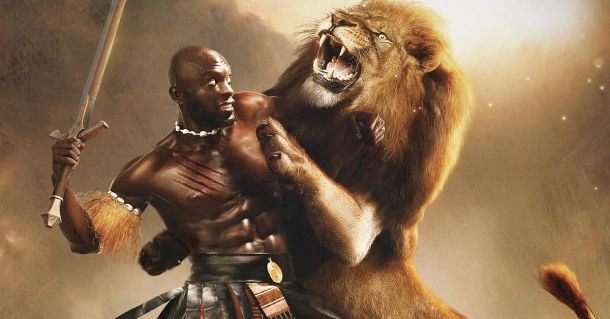 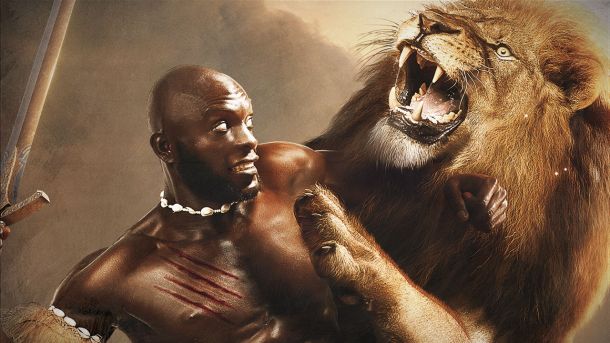 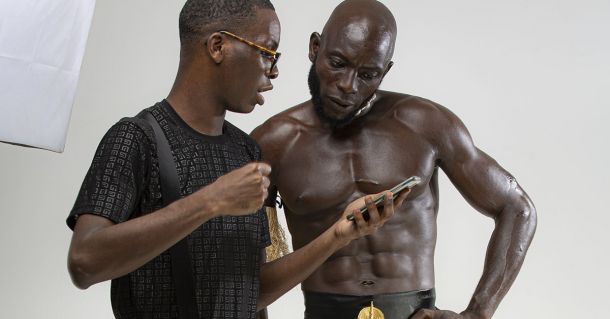 Making of "The Lion Slayer" 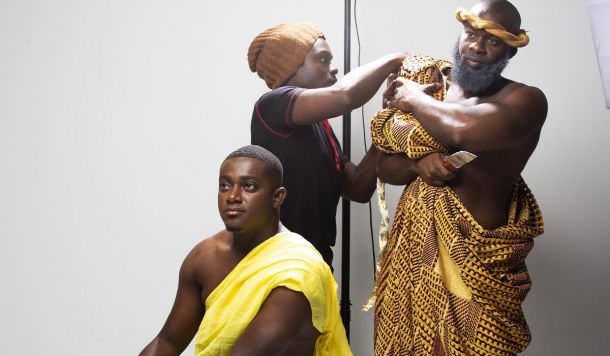